Neat. AA Batteries that you recharge in a USB port. From usbcell.com.

Projector size of sugar cube made 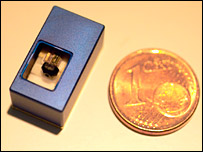 Neat technology... once this can be embedded in phones (essentially awaiting green diode lasers) then everyone will want one.

A video projector that is the size of a sugar cube has been created by researchers.

The miniature device could be used to project images from mobile phones, PDAs or laptops, according to the team.

It was created by researchers at the Fraunhofer Institute in Germany.

Traditional projectors use arrays of millions of mirrors to display footage, but this petite prototype comprises a single tiny mirror.

The width of projector measures less than 16mm; its height and depth is 9mm.

Inside, a laser is fired at a tiny vibrating mirror, which deflects the beam to produce the pixels that form the final image.

Presently the projector can only work with red and blue lasers, meaning any displays have a limited colour range.

Green diode lasers are not yet small enough to allow the device the full range of colours.

Speaking of the Future...

I spend quite a bit of time visiting schools and conferences to lecture on Change and on the Future of Education.

Douglas Adams came up with a set of rules that describe our reactions to change.

The trouble is that just about everybody who has any influence over education is over the age of thirty-five...

I spend most of my time attempting to address this problem...

I've spoken at many, many conferences. These seem to be representative:

I also seem to have visited a lot of schools, including State Schools. This list probably isn't complete...

I'm Head of Digital Strategy at Radley College in the United Kingdom.

I have previously been Head of Science, Head of Physics and Head of Careers. The fact that Radley keeps giving me new jobs suggests that perhaps I'm not very good at any of them.

Prior to Radley I spent 10 years in the Royal Air Force including 3 years as an Electronic Warfare Officer. This involved a lot of computers and a number of wars. I also spent a great deal of time working alongside Americans. This wasn't necessarily a bad thing.

I have a reputation for wearing loud waistcoats... (that would be "vests" in the USA).